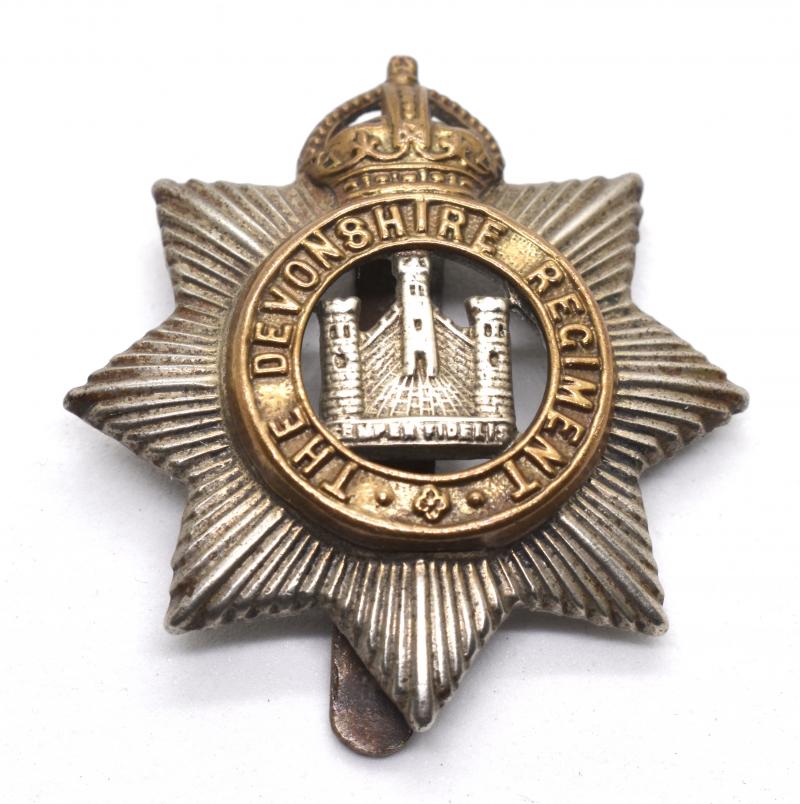 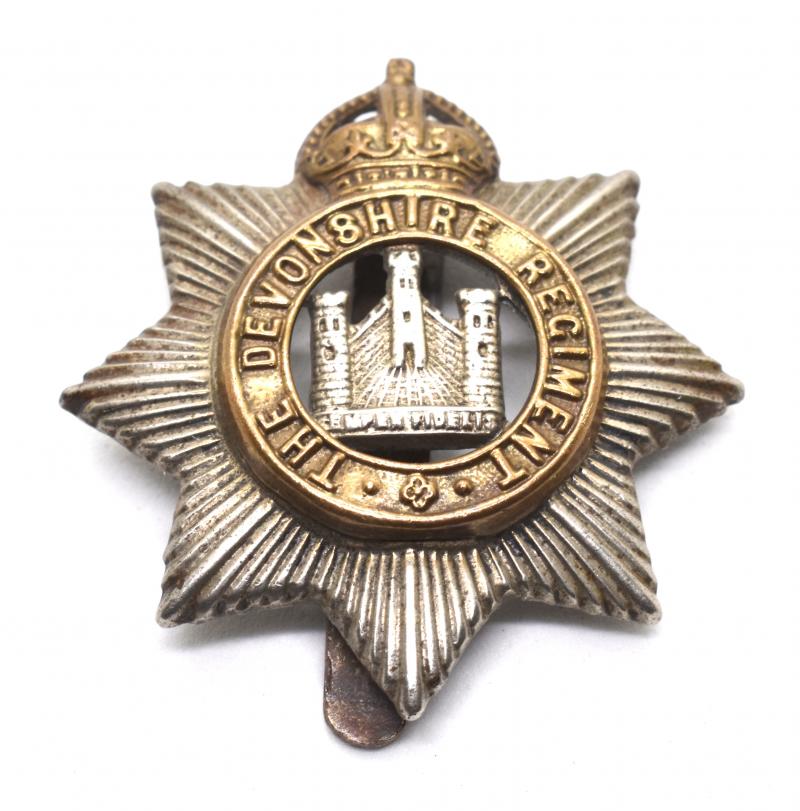 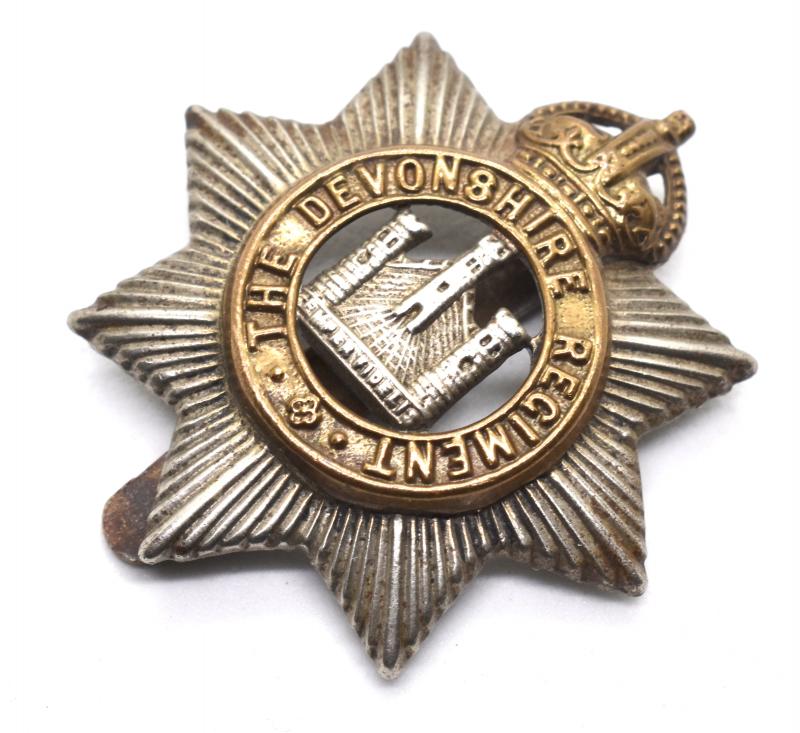 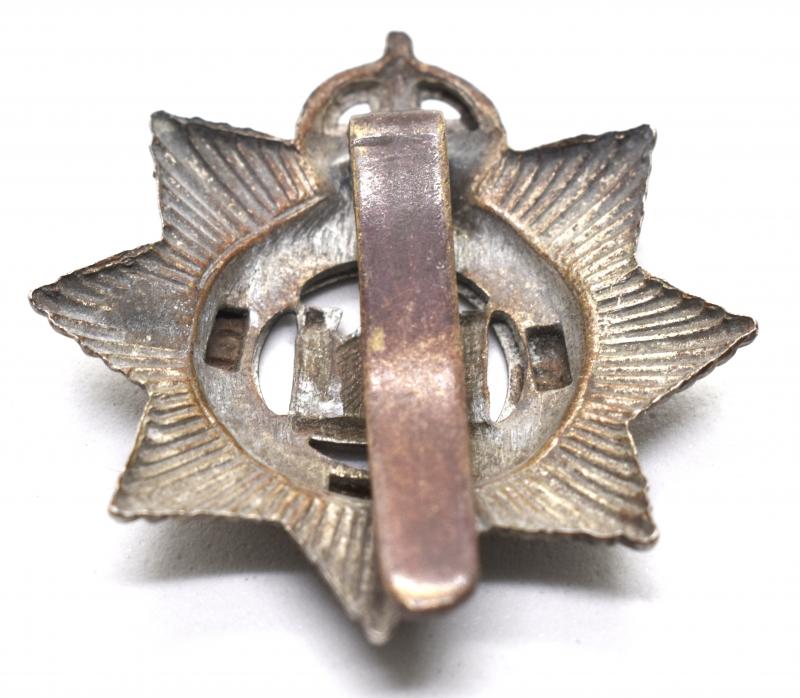 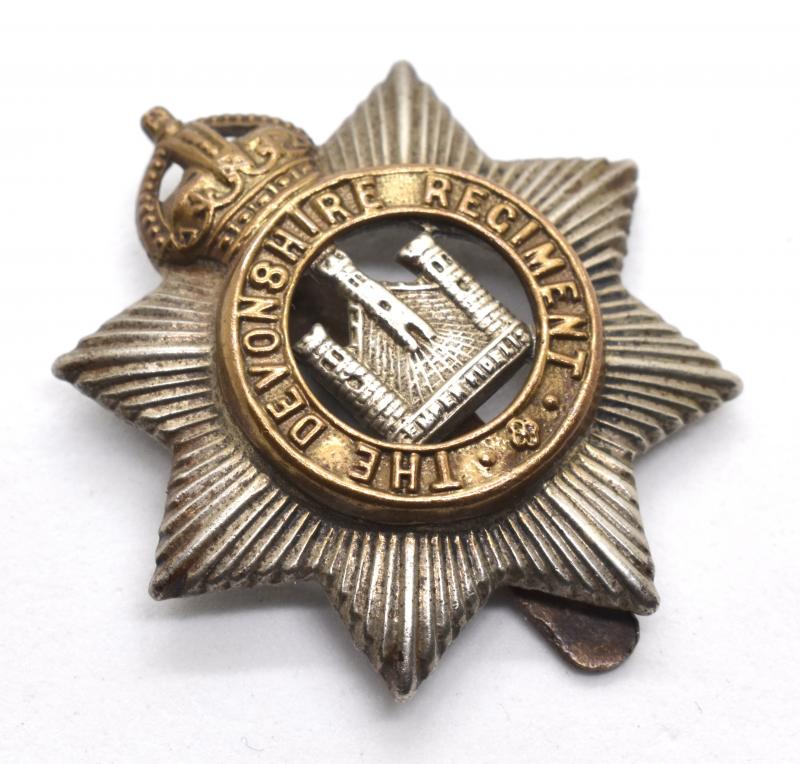 British WW2 Devonshire Regiment cap Badge
Very nice metal cap badge of the “Devonshire Regiment”
The 1st Battalion was serving in British India when the Second World War broke out, and spent the entire war in India, Ceylon and Burma. In 1942 the battalion joined the 80th Indian Infantry Brigade, attached to the 20th Indian Infantry Division and served with them until 1945 when the battalion was transferred to the British 26th Infantry Brigade. The brigade was part of the British 36th Infantry Division.

The 2nd Battalion, Devonshire Regiment was a Regular Army unit that was serving on the island of Malta as part of the 1st Malta Infantry Brigade (redesignated as the 231st Infantry Brigade in April 1943) and was involved in the siege of Malta from June 1940 until November 1942. In July 1943 the battalion, together with the 231st Brigade, fought in the Allied invasion of Sicily, and, briefly, in the Allied invasion of Italy in September. After Italy the brigade was withdrawn to Sicily and then the United Kingdom where it became permanently part of the veteran 50th (Northumbrian) Infantry Division and trained with them in preparation for the Allied invasion of Normandy. On D-Day, 6 June 1944, it was intended that the battalion, commanded by Lieutenant Colonel Cosmo Nevill, should land at Le Hamel, on Gold Beach, behind the 1st Hampshires. However, owing to adverse sea conditions and an unexpectedly high tidal surge, three of the four rifle companies were carried over a mile to the east before they could make landfall and had to make their way to their assigned assembly point on foot. Of the four company commanders, two were wounded and one was killed. The battalion continued to fight well throughout the Battle of Normandy and the liberation of North-West Europe. However, in December 1944, the 50th Division was disbanded, due to a severe shortage of infantrymen in the British Army at the time, and the battalion was transferred to the 131st (Lorried) Infantry Brigade, part of the 7th Armoured Division, The Desert Rats, and remained with them for the rest of the war, participating in Operation Blackcock in January 1945 followed by Operation Plunder where they crossed the River Rhine. The division advanced on its destination of the city of Hamburg, Germany, as part of the Western Allied invasion of Germany, taking part in the Battle of Hamburg in late April 1945.

The Devonshire Regiment raised the 8th and 9th Territorial Army battalions, in addition to the 4th, 5th and 6th, all of which (except the 5th, which was converted pre-war into 86th Anti-Tank Regiment, Royal Artillery) were serving in the 45th (Wessex) Infantry Division on the outbreak of war. However, none of these units, save the 4th Battalion, saw active service outside of the United Kingdom and were used mainly for home defence, training or supplying the other battalions of the regiment with infantry replacements and served with many different brigades and divisions such as the 80th Infantry (Reserve) Division. The 4th Battalion was sent, in May 1940, to Gibraltar to join the 2nd Gibraltar Brigade and returned to the United Kingdom on 28 December 1943 and eventually joined the 164th Brigade, 55th (West Lancashire) Infantry Division before finally ending the war in the 183rd Infantry Brigade, 61st Infantry Division. The 6th Battalion was transferred to the 141st Brigade, 47th Division.

The 50th (Holding) Battalion was raised in 1940 and renumbered the 12th Battalion the same year and spent most of its time on home defence anticipating a German invasion. In June 1943, due to the huge expansion of the British Army's airborne forces, the battalion was transferred to the 6th Airlanding Brigade, part of the 6th Airborne Division, and were converted into glider infantry, trained to enter battle by glider. The battalion landed in Normandy in the late afternoon of 6 June 1944 in Operation Mallard. The battalion also fought in the Battle of Breville, and served throughout the Battle of Normandy but as normal infantrymen. The battalion remained in Normandy until August 1944 where it participated in the breakout from the beachhead. The battalion, along the rest of 6th Airborne, was withdrawn to England in early September where they received new replacements, equipment and continued training. In December 1944 they fought briefly in the Battle of the Bulge but the outcome was already decided before the division arrived. The battalion crossed the River Rhine in Operation Varsity in March 1945 alongside the U.S. 17th Airborne Division. The battalion ended the war by the River Elbe. Throughout its time in 6th Airlanding Brigade, the battalion was allegedly nicknamed the Swedebashers by the men in the other battalions (1st RUR and 2nd OBLI), due to the battalion being commanded by a regular army officer but nearly all the officers and men of the 12th Devons had enlisted for hostilities-only.